There is a relatively new forum over on Crochetville entitled "Giveaways" (you may need to be logged in to see it) in which I have been lurking here of late. It's a simple concept. A member posts an item that they've made to the forum and then chooses a fellow member to give it away to.
There are various methods for choosing a recipient. Some post pictures and then have people request to be added to the list, then they choose from the recipient from the compiled list. Others simply choose people at random to receive their lovely gifts.
Many of the "Giveawayers" make and offer an item each month. Usually the same item but in a different color or style. Tammy, of Coffee n' Crafts fame, has been offering a crocheted hook cake each month. Her cases are usually themed for the month, and are always super cute and awesome.

My favorite so far has been the *Summer Time Seeds* Hook Case. I had seen the post and knew I loved it and wished I could have it, but knew there were a LOT of people who felt the same way as I. So imagine my surprise when I saw that big puffy envelope with her return address on it!
Isn't it just AwEsOmE?!

And packed with extra goodies too! 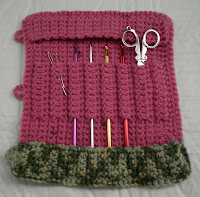 I should know better than to turn my back on a 2 year old, even for a second, for I know terrible and destructive things can, and will, happen. I take full responsibility for it though. I should have put the scissors up.

I had been crocheting dilligently the night before. I was in the homestretch. I was almost finished the project. Nothing like this has happened before. He honestly thought he was helping. He started crying when I cried, the poor thing. I should have put those darn scissors up!

Since Ben's "surgery" on my latest project I've been in a crochet slump. I still haven't brought myself to attempt re-construction. I did, however, finally bring myself to inspect the damage. It won't be impossible to fix. It's an afghan done in strips. One of the strips is beyond repair, but the other 2 that were damaged shouldn't be too difficult to fix. whew

Tears were shed, lessons were learned (on both sides). The scissors are safely hidden away on the highest shelf, where they belong, safe from adventurous little fingers. :)
Posted by April at 2:46 AM 1 comment: 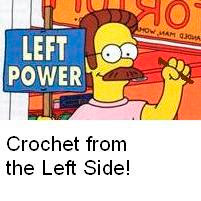 I encourage you to share (via web link) and use the patterns presented here for charitable purposes. I promise you will be rewarded with a warm fuzzy feeling for your generosity. :) And as always, you are free to use the patterns, and items made from them, for your own personal use, gifts, local craft fairs, etc...

*When sharing our patterns please share the URL, not the actual pattern.